This week I received copies of a magazine put out by Harlequin and I’m on the cover. 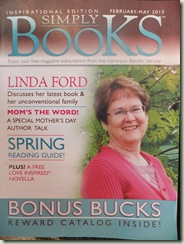 I thought you might enjoy the article that is inside. Here it is:

If anyone has read my bio you will know that from a young age I wanted to own an orphanage and have a dozen kids. Then I fell in love with a farmer/rancher whom I knew would never be torn from his beloved farm and cows. I thought my dream had to be pushed aside in order to marry and settle down as a farmer’s wife. But the dream did not die nor would it leave me alone. When I shared my desire to help children without families, my husband was supportive. But by then we had four children of our own and the rules said only childless couples could adopt unless. . .

We were fine with the unless—an older, hard to place child. We merrily went on holidays knowing there would be a long waiting period, only to return home and discover the social worker had been trying to get hold of us (this was before cell phones). Would we be willing to take a seven month old baby? We were certain she’d made a mistake. Didn’t she mean a seven year old child? No, she didn’t. The baby was mixed race and had some health issues. But he was the cutest thing on two legs. That was the first of unexpected additions.

The social worker begged us to sign up as foster parents and help kids in need of a temporary home. That wasn’t part of our vision but we agreed to take a family group. They were later available for adoption and became part of our permanent family.

Then there was the fourteen year old native boy who had been in every sort of situation. His foster parents needed some respite so he came to visit us for the weekend. On Monday morning, I took him back to where he was to meet his foster father. But the boy purposely gave me wrong directions and wrong time so he missed his ride. I had no choice but to take him to the social worker and ask what she wanted to do about it. At that point the boy—big and solid and not about to be argued with—said he didn’t intend to go back there. He meant to stay with us. Again, before the advent of cell phones, I couldn’t phone and discuss it with my husband. Instead, I took him home and said we would decide from there. He never did leave until he graduated from high school.

While some of our children came unexpectedly, others came because we saw their need and asked to have them.

I hadn’t realized the similarity of my story to the second book in my EDEN VALLEY COWBOYS series until the editor pointed it out. THE COWBOY’S UNEXPECTED FAMILY is a tale of how a lonely cowboy with no family finds four children who need a temporary home. He can’t do it alone and appeals for help to a very independent young woman who has had more than her fill of family life. The series is set among the foothills of Alberta, a setting much like the place where we raised our family.

I am happy that I lived my dream of a big family even though it wasn’t always fun and we have the heartache that some of the adopted children no longer keep in contact. In the stories I write, I like to be realistic about problems, but I also like to show my characters they have the opportunity to make their own happy endings. . . something I’ve tried to teach my children as well.