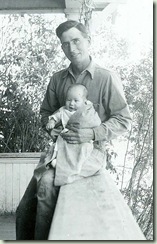 My father has been gone a number of years but I want to remember him on this father’s day. He was a special man in so many ways.

He worked hard. His own father homesteaded in Alberta and he grew up facing challenges. He continued to face them with strength and dignity when he became sole parent to six children before he married  my mother.

He never complained. In fact, he made it a personal ambition to never do so. After every meal, he graciously thanked my mother and did the same when he was a guest. In his later years he had to live in a long-term care facility and was adored for his cheerful attitude. One nurse told me of overhearing him kneeling at the side of his bed at night and saying his prayers. “Help me not to complain even though I don’t like living here.” I’ve always thought his attitude was one the whole world should copy.

My father loved his pets. He once had a part-Siamese cat who suffered from a case of bad attitude but my father loved that cat and bragged about how he guarded the house. He called him his watch cat. When he was in the nursing home I saw how other residents loved stuffed animals and bought him a little stuffed dog that went everywhere with him. If the visiting grandkids got a little too rambunctious with it he would ask them not to tease his dog.

Not that he was above teasing. I am the smallest in the family and he used to say so long as I was tall enough to brush my teeth I was okay. Or he’d say good things come in small packages and then with  a sly smile add, but then so does poison and dynamite.

He loved to study the Bible and did a detailed study of the Tabernacle that my mother illustrated for him. A priceless keepsake.

My father taught me how to drive, how to shoot a gun, how to find fossils in a grave bed. I remember being carried outside in the middle of the night when I was about six years old to see a lunar eclipse. He taught me the constellations. (I wish I could remember them.)

My father was a great man and I honor him on this special day.