I recently started a new story. I constructed a good idea—a really good idea! An innocent man jailed. A widowed woman with three little girls. Turns out the hero’s twin brother was the guilty party and let his twin take the fall. Five years of hard labor and the hero is finally free. He’s spent the few months since his release trying to find his brother. He’s wants an explanation, maybe an apology, but more than that, he wants his brother back. Five years in prison teaches a man how lonely life is. http://www.pcmaf.org/pictures.htm 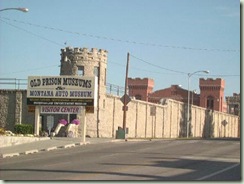 Site and picture of Montana Territorial Prison which I have actually visited.

Turns out the woman with three kids is his brother’s widow and the stories she’s heard of my poor innocent hero make her unwilling to be his friend. But the ranch she owns which provides a safe home for herself and her daughters needs the strong arms of a man and the hero, after five years hard labor, has the strong arms to offer.
Whoa. I better not tell the whole story because that wasn’t what I started out to tell you. I wanted to tell you how much background work goes into a story.
Now that I have an idea of what my story is going to be about, I have a lot of things to discover.
First, the names. It took me 9 months to name my babies and now I have to come up with names for the hero, the heroine, the twin brother, the three little girls, the uncle, the aunt, the mother, the father, the neighbor, the cousins, the store owner. And the names have to be just right. I have to feel them. I would have a hard time writing a strong woman struggling on her own named Suzy. Or a sweet woman named Gertrude. But I got that done. Jake and Clara are my hero and heroine.
Then I need to research prisons, etc. When did Montana—if that’s where I want to set the story—get a prison? (1871) I’ve actually visited the place never, at the time, suspecting it might figure into a story.
So what did Montana look like during that era? More research.
So I maybe have a place and a time period. Now who are the characters? Where did Clara come from? Ohio. What area? Hamilton. (Now I want to visit there). Here’s a site with information about the city.
http://freepages.history.rootsweb.ancestry.com/~vlwest/eButler/hamilton.html
and a picture from that site. 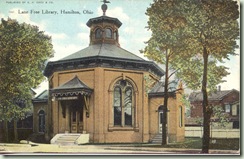 And another site with a photo from the site.
http://freepages.history.rootsweb.ancestry.com/~vlwest/eButler/hamilton.html

What did her father do? I learn that in 1846 the place had Six years later the town included seven churches, a women’s academy, two newspapers, three cotton mills, three flourmills, two machine shops, and sixteen retail stores. I didn’t want her father to be a farmer so I gave him a job in a cotton mill. More research.
Who was Clara? What did she like to do? Read? What would she read? What magazines and books would be available? Were dime novels available at that time? Turns out they were first printed about 1860 and a popular women’s magazine was the Ladies Companion. I’m not sure when it was first published but I can find copies on-line back to 1840.
And so it goes. Soon I’ll have enough little nuggets to feel I know Clara then I’ll have to repeat for Jake. No doubt, throughout the story I will have to research things as well. Thank goodness for the internet. It’s amazing what a person can find. Many historical societies have copies of documents, books and pictures available. The Library of Congress has a wonder site with lots or resources. It takes time but can be fascinating.
BTW, don’t ask me if I’m finished this story yet. It will be a work in progress for some months yet.