I write fast and furious, sometimes doing 5000 words in a day. It’s how I work but it’s also a skill I’ve developed and I believe it is a skill anyone can develop.

What’s my secret? The only secret I know is to get started. That’s the hardest part. There are things I do to help me get to that point. (Besides procrastinating, emailing, checking Facebook and calling a writing friend on the pretext of brainstorming.) 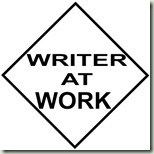 1. I make scribbled notes (usually before hand) to give me a road map of where I’m going. For instance, in the epilogue I’m about to do I have a mental list of the things that have to happen. I will likely write it down at some point so I don’t have to think about what events I need to include as I write.

2. One thing that really helps is to open a document that isn’t the story and just start typing. For instance I would say something like this: oh crap. another day I don’t have any idea what I’m supposed to write. I’d sooner have a nap anyway. or play solitaire. what do i want to say what happens next. what happened last i can’t even eremember. a scene. i need a scene. my kingdom for a scnee. so they spent the day togther, now what. his pov–they talk –Sunday night. A poignant evening as if both know their time of sharing and visiting is about to end. Why hasn’t he said anything? What’s he going to do about the gold. what does he want to do–his goal. her reaction. scene details.

I write it just like that. No concerns about spelling or punctuation. I’m just thinking on the screen. At some point I start to see the scene and write it.

3. I list things that are in the scene—smells, sights, sounds, people, what are they wearing, etc. Usually, before I know it, I am writing the scene and just keep on then copy and paste what I need into the REAL document.

4. I sometimes shift to first person pov and begin to write down everything that character sees, hears, etc.

5. I set a timer. This really works. Believe me. Set the time for 15–20-30- even 45 minutes. During that time you just keep typing. No correcting–it might look like the paragraph I did in #2 but never mind. Just write. The idea is to get past the controlling internal editor.

6. Cover your screen if you must to keep from looking at it.

All of these are simply tricks. The more you implement them the better your creative side becomes at obeying them. For instance all I have to do some days is pull out the timer and set it and my brain immediately shifts to creative mode. I don’t even need to start the countdown. In fact, my timer is set at 8 minutes right now. I shut if off for some reason and never got back to starting it again because I didn’t need to.

Remember the purpose of all this is to trick the internal editor into ignoring you as you work. Practice makes perfect.