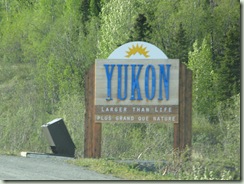 This sign says ‘larger than life’ which is a pretty good way of describing the north. Everything is big. And beautiful. I was overwhelmed by the size and the beauty. 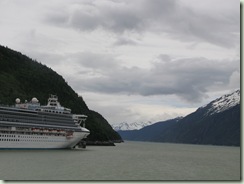 Here is a picture taken as we are on a ferry leaving Skagway for Haines. The tour liner is one of many that stop here every day and disgorge thousands of tourists. When 5 of them are berthed at the docks the streets of Skagway are so crowded it’s difficult to walk. However the early mornings and late evenings when those tourists were back in their ships, the streets were quiet. 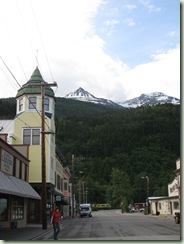 Skagway is a picturesque town that has maintained much of the construction and atmosphere of its earlier days during the Klondike Gold Rush. Departing from Skagway over the White Pass was one way of reaching the gold fields.

The other pass was the Chilkoot that left from Dyea…now a ghost town. We hiked about looking for evidence of this town that once had a population of 10,000. Only a few scattered bits of boards remain. 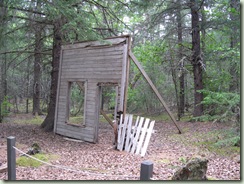 And this false front. An interesting little hike though. Trees planted along the former main street of Dyea have not stood up well to the test of time. In fact, they are quite spooky in appearance. 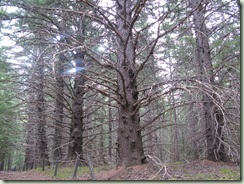 Contrast that with the new, fresh growth of younger trees in the same area. 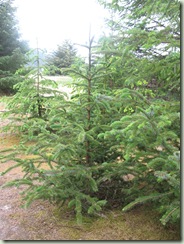 Despite the gnarly old trees there is unbelievable beauty everywhere.

We saw lots of the Arctic Lupine. 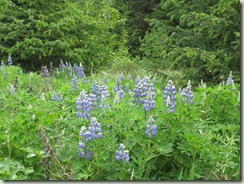 (Click on any of these pictures to enlarge and enjoy more.)

But of course, the best thing about visiting Dyea was to see the Chilkoot Trail. After walking a short distance on it I am amazed to think of men and women, burdened with heavy loads, crossing this in the winter (or summer). And it only gets steeper and more rugged. 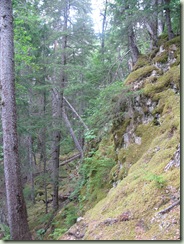 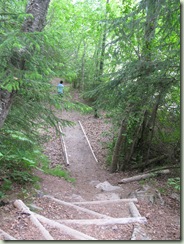 Note the moss and other evidence of being a costal rain forest.

There was so much to see and do and enjoy. I will share more with you in the coming weeks. Of course, I did tons of research and have lots of ideas for stories. Now to find the time to write them.