I have a pet peeve. Well, actually, many of them but I only want to mention one today.
Hay. Yes, hay. Dried grass, alfalfa or a mix used to feed cows and horses. Hay can be sweet or dusty and musty. It can be put up as small square bales under 100 pounds that can be handled by a man or large squares and round bales weighing several hundred pounds which require a tractor or truck to move.
Why, you may well ask, is hay a peeve for me? I will tell you. It isn’t exactly hay but rather, how it is portrayed in historical movies and stories. How often have I read that someone tossed a bale of hay to the horses or have I seen cowboys perched on bales as they sit and chat or sing? In the 1800s. Where, I wonder, is the baler to make those bales? Or the tractor to power the baler?
A bundling/binding machine was invented in 1872. But not until 1936  was an automatic baler developed. Even then, one needed a tractor and money to buy both machines. No, my dear reader, back then hay was put up by hand. Stacked in haystacsk. Put loose into a hayloft or stored in well packed stacks.
Typical, the work was done by a man with a wagon and pitchfork but there were men who came up with creative ways to make the work easier. 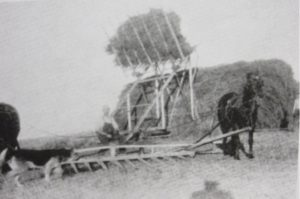 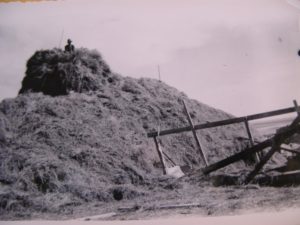 I guess it comes down to paying attention to the details of the era in which we write.
How about you? Do you have a pet peeve about inaccurate historical details?