I had occasion this week to see where my grandparents used to live. They’ve been gone many years but as I was in the neighborhood, I wanted to see if the house was still there and what memories I’d have of the place.

The house was gone, replaced by a new one. Yet many old homes still stood. The street was narrow, as I remembered, the houses close together. A quiet, sedate neighborhood. 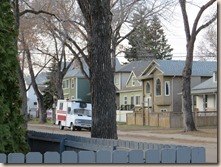 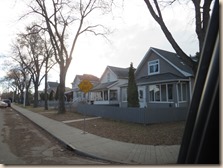 Yes, there were memories like a boy coming to see us as we played in the yard. I don’t know if he lived there or was visiting as we were but he was all too happy to show us his brass knuckles and tell us how dangerous he was. I tended to believe him but then I was from a small town where we had never encountered anything like that.

Then there was the time an ambulance screamed up and stopped across the street. The attendants rushed inside and brought a man out on a stretcher. We had never before seen an ambulance in real life. How shivery exciting for three young kids.

My grandmother was small and constantly fussing. My grandfather was tall and quiet. My aunt lived with them and took care of them. She had the husky voice of a smoker. They had a yellow canary who, once he got over the shock of seeing children, sang. As I recall, their front room was crowded with furniture including a china cupboard full of knickknacks.

Below is a picture of their wedding day in 1890, another of them in front of their home in Kansas and the final one is the celebration of their 60th anniversary. 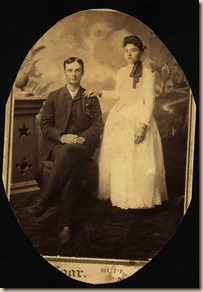 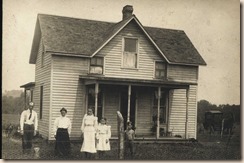 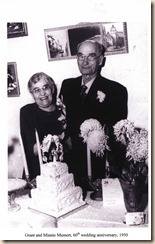 I was disappointed that the house in the city was gone but the memories remain of the long, long drive to where they lived. We crossed several rivers and drove through woods.

Now I’m the grandmother and the kids come to see me. I don’t have a canary but I do have a parrot who loves to dance with the kids. And the grandchildren can run and play with abandon on our farm. 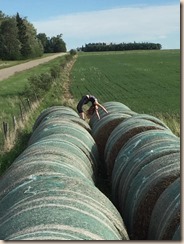 I hope my ramblings have brought you warm memories of your grandparents. Do you have one special memory?