No doubt you’ve hear our family name—Ford. I may have married into the name, but I figure it gives me the right to access all of its fame. And the family has many claims to fame.

A man sharing our name invented the affordable family vehicle and a company bearing his name is still making affordable vehicles, though they seem somewhat less than affordable when we have to make the monthly payments. And no, bearing the name does not give us a financial advantage when it comes to buying a vehicle with our name branded on the front.

Our family ruled the United States for a while. It doesn’t matter that the ruler was adopted. Just goes to show what lengths people will go to in order to attach themselves to the family

Then there are the ones who made it big in the movies—both adventures and westerns. I blush to admit that the aversion for snakes revealed by Harrison seems to be synonymous with the name.

But have you heard of one of the most famous Ford of all?

That would be my father-in-law.

He and his brother left Exeter, Ontario during THE war in search of adventure and a cause that would aid the war effort. Farming seemed the noble thing to do so one brother settled in the grain belt of Saskatchewan and my father-in-law found an abandoned farm in the desert of eastern Alberta. He was able to purchase the land by driving the school bus to pay off the back taxes

Farming may have sounded noble but his heart wasn’t in it. All his life, he remained a frustrated inventor. He was certain there was a better, more efficient, quicker way to do everything and would spend hours adjusting and experimenting while one or more of the seven sons gnashed their teeth and checked the sky, wanting nothing more than to get on with the job before the weather turned bad.

His philosophy was anything could be repaired with a piece of hay wire.

His fix-it bent drove many of his sons to tearing at their hair especially when the new combine sat idle in the yard while their father insisted he could fix the old one. 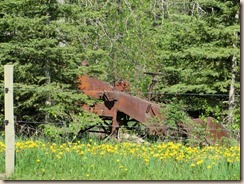 Not only could he make it run, but it would run better than the new one. And maybe he could have…given enough time, but with winter hovering on the horizon the sons only wanted to get the crop off.

Not that his efforts were in vain. He came up with some nifty ideas. Why waste time forking off hay? He rigged up a sling to pull the load off the wagon. Of course, sometimes his quest for a faster, easier way led him into a few predicaments. Like slapping the belt connecting the flywheel of the tractor to the hammer mill to make it catch. He tried it once too often and it caught. It caught the sleeve of his coat and almost tore his arm off. 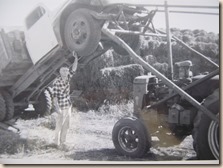 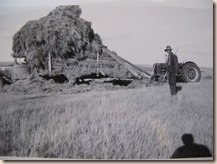 We bought the family farm and on trips around the yards I would often find myself staring at some maze of wire and belts. Upon questioning my father-in-law or one of the seven sons, I would be told it was how he pulled the pump, or fixed up an automatic waterer (long before one could go to the nearest farm supply story and buy one), or that’s how he bunched bales or any number of things.

I suppose being a farmer, he never had time to pursue all his ideas. Or to patent some of the better ones. There’s a lesson to be learned here. Ideas—like dreams—need to be pursued if we want to make the most of them.

Now if you’ll excuse me, I have a story idea that needs my attention.