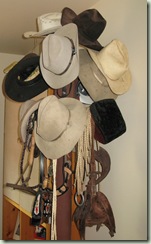 The cowboy hat is recognized around the world as an integral part of “cowboy” lore and truly is the defining item of clothing amongst all western wear. In the early days, it was primarily valued for it’s function with the wide brim protecting working cowboys from the sun and rain. It was very versatile and could also be used to signal others, fan a campfire, swat a horse or pull water out of a stream.

It is not clear when the cowboy hat began to be named as such. Westerners originally had no standard headwear. People moving West wore many styles of hat, including top hats and derbies, remains of Civil War headgear, sailor hats and everything else. 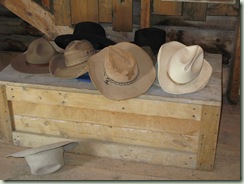 1865, with $100, John B. Stetson rented a small room, bought the tools he needed, bought $10 worth of fur and the John B. Stetson Hat Company was born. A year later the “Hat of the West” or the now famous “Boss of the Plains” hat was born and the name Stetson was on its way to becoming the mark of quality, durability, innovation and beauty

The original “Boss of the Plains,” manufactured by Stetson in 1865, was flat-brimmed, had a straight sided crown, with rounded corners. These light-weight, waterproof hats, were natural in color, with four inch crowns and brims. A plain hatband was fitted to adjust head size.. The sweatband bore Stetson’s name. While only making one style of hat, they came in different qualities ranging from one-grade material at five dollars apiece to pure beaver felt hats for thirty dollars each. Stetson focused on expensive, high-quality hats that represented both a real investment for the working cowboy and statement of success for the city dweller.

There is the famous “ten gallon” hats. The term came into use about 1925. There are multiple theories for how the concept arose. Stetson said his hats had been made sufficiently waterproof they could be used as a bucket. Early print advertising by Stetson showed a cowboy giving his horse a drink of water from a hat. However, even the Stetson company notes that a “ten gallon” hat only holds 3 quarts

The durability and water-resistance of the original Stetson obtained additional publicity in 1912, when the battleship USS Maine was raised from Havana harbor, where it had sunk in 1898. A Stetson hat was found in the wreck, which had been submerged in seawater for 14 years. The hat had been exposed to ooze, mud, and plant growth. However, the hat was cleaned off, and appeared to be undamaged.

Interestingly enough, the Mounties, now famous for their dress Stetson, completed their cross-country march in a pillbox that offered no protection from the sun and rain. 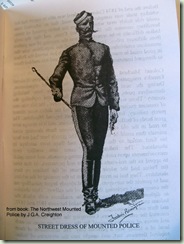 There is lots of individuality in a cowboy hat.

There are numerous styles as provided by this chart from Utah-based Western wear and tack company A.A Callister . 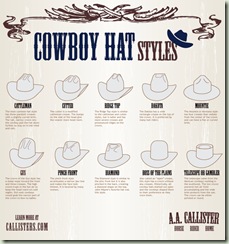 Even creases are used to give hats individual character and to help users identify with a particular subculture. Creases and dents make it easier to don or remove the hat by grasping it by the crown rather than the brim.

For everything you ever wanted to know about a cowboy hat, check out this site. http://www.thecowboyhatguide.com/ This site is broken out into several main sections:

Buying a cowboy hat:The basics of what you need to know when buying a new hat.

Cowboy hat care: How to take care of the hat once you you get it home

Wearing and etiquette: How to wear the hat in public

Videos: A compilation of many great cowboy hat videos I’ve run across

Cowboy hat FAQ’s: A collection of questions I’ve been asked over the years

Blog: More of a news feed about cowboy hats.

So what do you think? Does a cowboy hat look good on a man or woman?