Once upon a time, many years ago, we watched a funny movie. It was New Year’s Day and we were at my in-laws. Everyone was exhausted because of company, parties and Christmas in general so an amusing movie was in order.

The name of the movie was Once Upon A Horse starring Dick Martin and Dan Rowan (Of Laugh-in Fame). 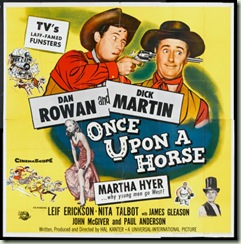 As I recall, the story line was about two petty criminals who decided to rustle cows and then the market fell. The sheriff threatened to fine them if they didn’t feed the cows properly. They tried to give the cows back but the owner couldn’t afford feed either so refused to let them leave the cows in his corrals. They even tried skipping town but the sheriff brought them back to take care of their cows. So they were stuck with worthless cows and had to buy expensive feed for them.

And there is exactly where truth and fiction intersect. But we won’t get into the current economic situation for farmers. Suffice it to say that often a story points to a truth that is painful, poignant or reveals something about us to ourselves.   Stephen King say Fiction is the truth inside the lie.

So read fiction to laugh at yourself and your situation, or to see the truth more clearly, feel it more deeply. Read it to vicariously learn how to live the truth through the characters. For me, I intend my stories to entertain at some level so most of all, read fiction–my stories in particular–for enjoyment.