Today I am blogging over here:

It’s about Mounties. Is there anything more stirring about our Canadian history than the story of the Mounties and how they marched across the prairies in 1874 to bring law and order to the west? But never mind jumping over there. I’ll repeat most of the information here.

Their official motto is Maintiens le droit… Uphold the right but most of believe the unofficial one—the Mountie always gets his man.

It all began with the Whoop-Up Trail that ran north from Fort Benton, Montana to near Lethbridge, Alberta along which goods and people travelled back and forth. Among the travelers were buffalo hunters, wolfers, gold hunters, natives and even early settlers. 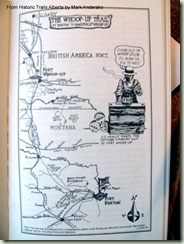 Through a Royal Charter signed in 1670 the Hudson Bay Company had an exclusive trading monopoly over the area of western Canada that drained into the Hudson Bay. That included all of present day Alberta except for a small section south of the Milk River that drained into the Missouri River and eventually the Gulf of Mexico. The Hudson Bay Company (HBC) banned trade in alcohol and had the power to enforce the ban. But the Northwest Trading Company encroached upon the HBC territory and had no conscience against trading furs for a little fire water. Then in 1870, the HBC surrendered most of its lands to the British Crown and the lands subsequently transferred to the Dominion of Canada. The land was wild and lawless.

By 1873, alcohol had become the principal trade commodity. This perhaps led to an event known as the Cypress Hills Massacre.

A party of wolf hunters was returning through the Cypress Hills to Fort Benton when their horses were stolen. The wolf hunters accused the Assiniboine Indians of stealing them (though it was never proven). Whiskey flowed freely that night and early in the morning the wolfers attacked the Assiniboine camp, leaving thirty dead and many wounded.

Order had to be restored to the area to make it safe for aboriginal people and settlers so Canadian prime minister, Sir John A. Macdonald, called for the formation of a military-style police force known as the North-West Mounted Police (later renamed the Royal Canadian Mounted Police—RCMP for short). Their primary responsibility was to protect the aboriginal people from the atrocities of the white man. Eventually they became everything from judge to jury to teacher to referee.

July 1874 saw the first detachment of red-coated young men set off on an epic journey across what would become Western Canada. There were 275 policemen, 339 horses, 142 oxen, 114 Red River carts, 73 wagons and two cannons weighing a ton each. They crossed mile after mile with no roads, no bridges and few supplies. After traveling 14 days they reached the Roche Percee on the Souris River. Their supplies were depleted, the horses exhausted and many men sick. The NWMP Commissioner, George French, divided the group in two. The sickest and weakest were sent along the easier 800 mile route to Edmonton, Alberta. The rest took the shorter but more difficult 550 mile route toward the foothills of the Rockies where they established a base at Fort Macleod. It all sounds romantic but the accommodations were primitive and trying. I’ve visited a number of restored sites and am awed at the conditions they endured. 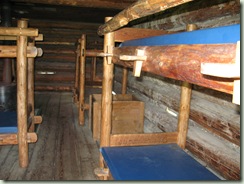 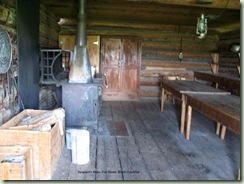 The Mounties, also known as the Red Coats, wore the red uniforms both to emphasize the British nature of the force and to differentiate it from the blue American military uniforms. On the march they wore pillbox hats which did little to protect them from the sun.  Thankfully they exchanged the pill box for a Stetson. Today they only wear the red for special occasions like marching in a parade. I have a picture of them marching down one of our streets. 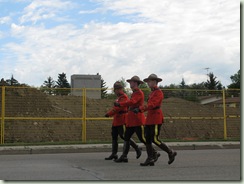 American Whiskey Traders from Fort Benton, Montana, had established a fortified trading post near what is now Lethbridge Alberta some years earlier. The post, called Fort Whoop-up, traded with the people of the First Nations for hides in exchange for guns and bad whisky. The fort was well armed and even had a cannon. However, when the traders heard the Mounties were coming, they abandoned the fort thus allowing the Mounties to take the fort without a shot fired.

In the months that followed, the whiskey trade was smashed and lawlessness sharply declined. By 1875, the police had erected additional posts at Fort Saskatchewan, Fort Calgary and Fort Walsh. Law and order was firmly established.

The Mountie is a colorful and interesting character who makes a noble hero in many books and films.

For sheer pageantry nothing compares to the musical ride that is still performed across the country. 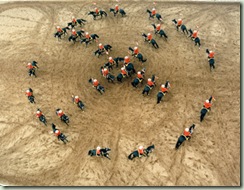 (Photos of musical ride taken from the official RCMP site–www.rcmp-grc.gc.ca/mr-ce/photos-eng.htm)

Just in case you’re wondering, and I’m sure you are 🙂 I do intend to write about the heroic Northwest Mounted Police sometime in the future.