It’s a question that is often asked. Where do writers get ideas? For me, they are everywhere. The challenge becomes to write them down if only on a scrap of paper towel before I forget them. (Where do lost ideas go? Does another author, quicker and with more memory storage get them?)
When I think of how many ideas are floating around, I think of my father-in-law.
Farming seemed a noble thing to do so he and his brother left Exeter, Ontario. The brother settled in the grain belt of Saskatchewan and my father-in-law found an abandoned farm in the desert of eastern Alberta and got possession by driving school bus to pay off back taxes.
Farming may have sounded noble, but his heart wasn’t in it. All his life, he remained a frustrated inventor. There had to be a better, more efficient, quicker way to do everything and he would spend hours adjusting and experimenting while one of his sons gnashed his teeth wanting nothing more than to get on with the job of seeding or harvesting the crop or whatever was on the seasonal agenda.
His philosophy was why buy new when anything could be repaired with a piece of haywire? His fix-it bent drove many of his sons to tearing at their hair when the new combine sat idle in the yard while their father insisted he could not only fix the old one but make it run better than the new. And maybe he could but with winter hovering on the horizon, the sons wanted only to get the crop off.
Not that his efforts were in vain. He came up with some nifty ideas. Why waste time forking off hay? He rigged up a sling to pull the load off the wagon.
Below are pictures of how he created a dump truck that didn’t have a hoist. 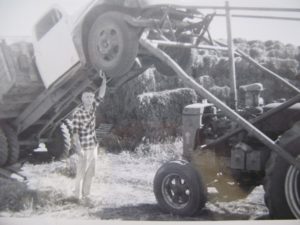 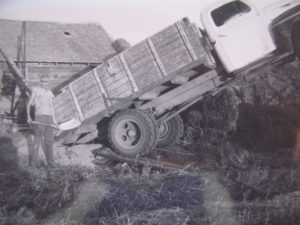 We bought the family farm and on trips around the yards I would often find myself staring as some maze of wire and belts. Upon questioning my father-in-law or one of his sons, I would be told it was how he pulled the pump, or created an automatic waterer (long before one could go to the nearest farm store and buy one), or that how he figured out a machine to bunch the bales for easier pick up. Any number of things.
I suppose being a farmer and having to do the actual physical work required in order to survive, he never had the time to pursue all his ideas.
It’s the same with a writer. I see story possibilities everywhere I look—the headlines about a baby girl abandoned, the reunion of old lovers who lost track of each other, the report of a man who rescued a woman trapped in a car—I could go on and on. There are too many ideas. Not enough time.
What amazes me is how a great idea will wed another great idea and the two of them breed and reproduce until there are hundreds of ideas forming a story.
I can’t say exactly how it begins. It’s almost magical. It’s like Robert Frost says as he describes the dawning of a poem. ‘It begins as a lump in the throat, a homesickness, a love sickness. It is never a thought to begin with. It finds its thought and succeeds or it doesn’t and comes to nothing.’
Now off to explore a few ideas and see if they will turn into a story.