Today, I thought I would share a guest blog I did on Petticoats and Pistols this week. 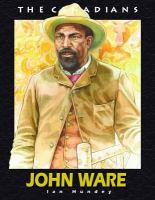 When I was a child, my father took us to what is now known as Dinosaur Provincial Park which consists of badlands along the Red Deer River south of our home. There he showed us a rough log cabin and said it had been the home of John Ware—a famous Black cowboy. He told us about the cowboy and it sounded so brave and wonderful. Since that day, I have had an interest in this unusual man.
John Ware was born a slave on a South Carolina plantation in 1845. He was freed at the end of the civil war in 1865 and set out to join a Texas cattle drive. John Ware was a big man and strong…by all accounts, a gentle giant. When he was freed he had a debt to settle with the plantation owner. He caught the man and led him to the whipping tree where John and many of his friends and family had endured the wrath of this man. But he set his ex-master free. John preferred peace to violence.
By 1882, he was an experienced cowboy and was hired by the owners of the newly-formed North-West Cattle Company at the Bar U Ranch to drive cattle into Canada. Once the cattle reached the ranch, John was asked to stay on. It seems he ate as much as two men and needed sandwiches as big as Bibles for lunch.
Breaking horses was one of John’s favorite jobs and he was good at it. One time some cowboys were having trouble with an unruly horse and asked John to help. He got on it and stayed on it as the horse raced toward Oldman River. The horse launched itself over the bank into deep water. Afraid of what had become of John, the cowboys waited until the horse emerged downstream with John still on its back.
Many stories of his feats abound. Like the time the cattle were caught in a snow storm. The cowboys tried to turn them but failed and all returned to the ranch except John. The storm raged for three days before the cowboys could go in search of John and the cows. They found him two days later still with the herd. He had not been dressed for the weather and joked he was afraid to flex his fingers in case they broke of like icicles.
Sometimes John performed feats of strength like straightening a curved hay hook with his bare hands, or lifting a barrel full of water into cart.
John had a dream—to own his own ranch. In 1890 he had built a house on the shores of Sheep Creek. But he wanted a family. He wanted to marry a Black woman and there were few such in Alberta. However, a family moved into the area. He courted Mildred and married her. He was 26 years older than her. They soon had four children.
The land around John and his family was settling up and John didn’t care for that so in 1900 he moved his family to near the Red Deer River. Mildred must have been shocked to see the treeless countryside with its stunted grass and the nearby badlands. Their sixth child was born there but he was never strong. Mildred never regained her health after the child was born. John rode the train to Calgary to get medicine. Where he returned to Brooks (the nearest station) he had 40 Km to ride to reach home. A storm made it impossible for the horse to make its way so John walked the distance. But sadly, the child, Daniel, died before his 3rd birthday. Later that year Mildred died of pneumonia.
That same year, John and his 11 year old son were cutting out some cattle when John’s favorite horse caught her foot in a badger hold and fell, pinning John beneath. John was killed in that accident. His surviving five children went to live with Mildred’s parents.
At his funeral, the pastor described John as “a gentleman with a beautiful skin.” John had not faced much prejudice on the open range though he experienced it in the towns and cities. He was believed to have said that “A good man or a good horse is never a bad color.”
I think of John’s strengths–both physical and emotional–and think what a great hero he would be in any story, just as he is in his own story.