This week I learned something about story telling from some moose. You see, all winter I’ve seen their tracks and knew they were about. Tracks that circled the trees, meandered across the lawn and crossed the road to wander over the fields. 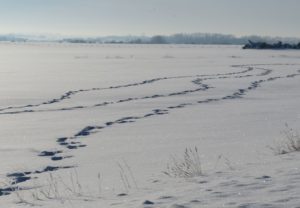 This week I saw them. Two of them. Only a few yards in front of me. We stared at each other for a few minutes and then they disappeared into the trees. 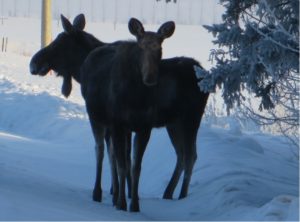 What, you may well ask, has this to do with story telling?
Let me tell you.
I am on the last pages of the first draft of a story for an upcoming new series–no titles yet. I could well call it a discovery draft. I had an outline, knew the characters wounds and dreams–you might say I saw the tracks. Just as with the tracks, I knew there were  moose about, I knew there was a story to be told. But I couldn’t really see it. Then a few days ago, it was right there in front of me as clear as two moose staring at me.
Sometimes stories are like watching the moose wander about the yard and nibble at the trees. Other times it’s like seeing the tracks but not the animals. The former is easier to write but the latter has an excitement all it’s own.
Watch for news on this new series. In the meantime, you can get my latest book, Temporary Bride, here: https://tinyurl.com/y9xm7utm