One of my goals every year is to do up an annual photo album of the family. It gives me a nice record of recent family history.

But among my family pictures are some that tweak my interest in things historical. Like this map at a nearby museum. 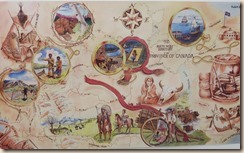 The inscription in the left hand lower corner reads: Historical Rendition from the Survey of David Thompson 1792-1812. The artist’s name is also there but I can’t read it and the date of creation is 07. 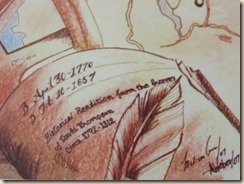 In my visits to various museums across the NW United States and western Canada I often encounter displays by this early explorer.

According to Wikipedia, David Thompson “was a British-Canadian fur trader, surveyor, and map-maker, known to some native peoples as “Koo-Koo-Sint” or “the Stargazer.” Over his career he mapped over 3.9 million square kilometres of North America and for this has been described as the “greatest land geographer who ever lived.”[1]

In 1811, he navigated the entire length of the Columbia River and mapped it.

In a museum in Libby, Montana I found this display featuring his writing instruments. In my mind I see him hunkered down in the midst of the prairie or next to a rushing river, his instruments about him as he measures by stars and sun and horizon to create maps that are amazing accurate. 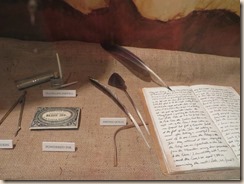 I know not everyone is interested in dusty old history but I am awed by men who walked or rode horseback across unknown territory. Can you imagine climbing hill after hill not knowing what lay ahead? Thrashing your way through brush and trees, coming to a deep ravine that you can’t cross and having to turn around and try another route? And then to map it. Amazing.

I struggle with getting my daily quota of words written with the magic of a computer and the instant information provided by the internet.

Sometimes I think people were made of sterner stuff back then. What do you think?