There is a new skyscraper in Calgary. The Bow. 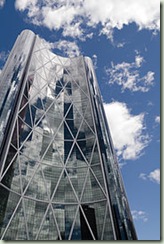 From then until Oct. 2008 when superstructure began, it appeared the construction crew accomplished little. Oh there was activity. But what were they doing?

We all know they were building the foundation.

So why do I tell you this?

Because I had another epiphany this week. That’s right. 2 in one year. (I’m just as surprised as anyone!)

You see, I was trying to figure out a story. I spent days making notes, doing various methods of brainstorming, attempting to fill in charts, and doing a lot of whining (not that anyone listened). All with nothing to show for it.

Then it hit me. The epiphany. It’s like building a skyscraper. The stuff that no one sees is vitally important. I was laying foundation hoping it would help me create a strong, solid story. (Only time will tell if I succeeded).

I’m grateful to say I am ready to begin the superstructure of my story. 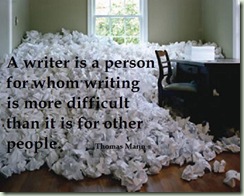 I’m including a link with harsh but true things about being a writer.