In January 2014–which is not that far away–another Eden Valley Ranch story will be released. 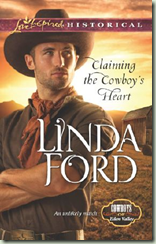 A Haven Out West

After witnessing her fiancé’s murder, Jayne Gardiner won’t let herself be caught on the wrong side of a gun again. But a disastrous first lesson in self-defense has left her with a wounded cowboy. She insists on nursing the handsome stranger back to health—whether he wants it or not!

Getting waylaid by a wild shot has definitely put a hitch in Seth Collins’s step—and plans. Duty may call him home, but Seth can’t resist lingering on Eden Valley Ranch to teach the English beauty to shoot. And when a shadowy figure from Jayne’s past resurfaces, Seth’s sudden urge to protect her has nothing to do with duty.

This is the first of three stories featuring young ladies who have traveled from England to the Eden Valley Ranch.