It amazes me to think that during the majority of the gold rush era gold was worth less than $20 an ounce. Not it’s around $1500 an ounce. It didn’t make significant increases in price until the 1970s.  I wish I could lay my hands on a gold vein somewhere. Did you know they still haven’t found the source of the Klondike gold? Hmm. Maybe I should move.

But I digress. I am seriously looking for gold but in the 1800s. I have a series of stories I am considering based on a gold rush.

I’m thinking Montana. I normally don’t think of mining when I think of that state but according to a book, Montana’s historical Markers, a newspaper headline of1910 read, Mining Places Second Fiddle–For the First Time in Montana’s History Agricultural Products Take the Lead.

There are many mining areas. I think of Virginia City which has been a town since the 1860s. 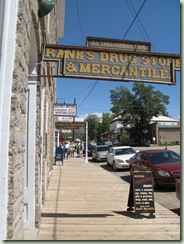 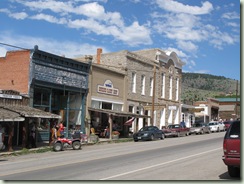 It is part living museum and part modern shopping. It has never been a ghost town–its residents will make sure you understand that.

Unlike Nevada City which is next door and qualifies as a ghost town restored to be a tourist attraction. 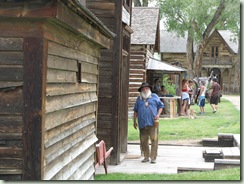 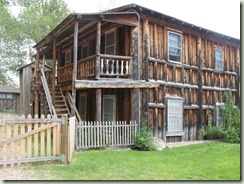 Some of Lonesome Dove was filmed in Nevada City.

Another area I am considering is Libby, Montana, in the NW, amidst mountains and stunning scenery. According to the Libby, MN official site,

Prospectors first tested the gravels of the Libby district in the early 1860s. John S. Fisher and several other men came through the area at that time looking for gold. They also named a number of the local creeks including Fisher River, Libby Creek (after Stephen Allen’s daughter Elizabeth or Libby), and Sherry Creek (after Jack Sherry), later changed to Cherry Creek. Activity increased during the summer of 1867 when a group of prospectors started placering along Libby Creek. Their success attracted as many as 500-600 men to the camp by September. Fortunes varied, however, with some making as much as $1.25 per pan while others washed only two cents per pan. Most men left for the winter, and those who stayed helped dig a ditch to bring water to some claims. While the camp increased again the following summer, the boom was brief and it was virtually deserted by the 1870s.
Chinese workers played an important role in the early placer mining on Libby Creek. In one incident, several Chinese workers were caught robbing sluice boxes of gold dust, and were driven out of the country. They lingered awhile at the rapids of the Kootenai, above the falls, to try their luck at washing gold, which is how China Rapids got its name.

I haven’t decided my destination but in the next year I will be panning for gold somewhere.