First Friday in Pueblo, CO where my daughter and her family lives features an art walk. Art galleries are open and demonstrations given. We went to several. (I was almost freaked out by the art that featured skeletons in various poses. My imagination is far too vivid for that sort of detail. Was the body murdered, molested, buried alive? Shudder)

The best part of the evening was the Raku pottery firing.

Raku pottery is created with a specific ceramic firing process that uses both fire and smoke to create unique patterns and designs. With raku pottery, the piece is first bisque fired. Then, it is glazed and undergoes a raku firing process. The raku firing process requires a special raku kiln that is fueled by propane and reaches temperatures of about 1800°F (about 982°C).

After the materials inside the metal can catch on fire, a lid is placed over the can and the raku pottery is sealed inside. The raku pottery is capable of withstanding these high temperatures and the fire within the can because it is made from a special type of clay that is capable of withstanding thermal shock. Traditional pottery clays, on the other hand, would crack from the drastic temperature changes raku pottery undergoes. (from http://www.wisegeek.com/what-is-raku-pottery.htm)

For $10 we bought any sort of figurine we desired and then applied 3 coats of glaze. 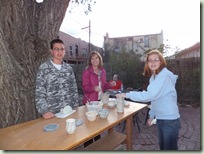 We worked outdoors in a friendly, picnic type atmosphere. 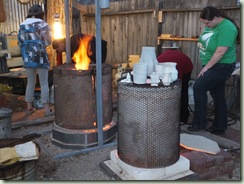 The pieces were then fired in outdoor propane-powered kilns. We went away and left them for 30-45 minutes. 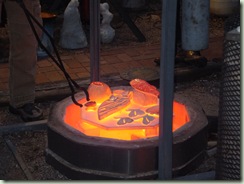 When the top was removed, the pieces glowed like live coals. Beautiful. 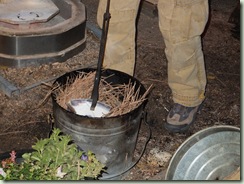 The red-hot pieces were immediately put into a container of combustible material. They used shredded newspaper but some stunning results were achieved by using pine needles. 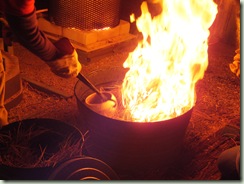 That container was covered tightly to use up all the oxygen. They covered the lid with a wet blanket to keep the smoke down.

And then half an hour later or so, everyone gathered around as the lid was removed and the pieces removed and stuck into cold water to cool them. Everyone wanted to see how the glaze had turned out. I have to confess I had a few minutes of envy at some of the pieces. 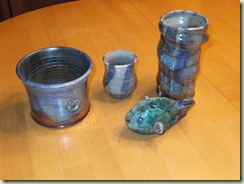 But our pieces aren’t so bad either. It was the first time I’d done it but I can see why some of the people at the pottery place came back month after month to experiment. It could become addictive.

Raku-yaki (??)(raku ware) is a type of Japanese pottery that is traditionally used in the Japanese tea ceremony, most often in the form of tea bowls. It is traditionally characterized by hand molded, rather than turned, clay, which results in each piece being “one-of-a-kind”; fairly porous vessels, which result from low firing temperatures; lead glazes; and the removal of pieces from the kiln while still glowing hot.

Raku means “enjoyment” or “ease” and is derived from Jurakudai, the name of a palace, in Kyoto, that was built by Toyotomi Hideyoshi (1537–1598), who was the leading warrior statesman of the time. (From wikipedia.)

This may be something you’ve done before but if you haven’t, I encourage you to do so if you ever get a chance because, as the quote above says, it brings ease and enjoyment.