A is for April in Alberta with sunny warm weather one week and a blast of winter snow the next. We had the snow the beginning of this week. Needed the moisture but could do without the misery of bad roads. Our gravel road was almost impassable. A big freight truck got stuck and we had to pull it out with the tractor.

A is also for A. You see, I am overwhelmed with the selection of books when I enter the library. (Have the same problem of being overwhelmed by selection when I go to a store.) So I decided to start at A and pick a book from each letter of the alphabet, seeking in the most part to read a new author.

So A is for Atherton, Nancy and her book Aunt Dimity and the Deep Blue Sea. 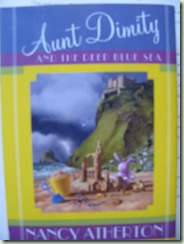 Atherton lives in Colorado but her book is set in the British Isles–Scotland. She has a fluid, descriptive way of writing that I found enjoyable. Aunt Dimity is a ghost. I thought she could have written the story just as well without the ghost who writes in a journal in response to the protagonist’s comments but that’s just me, I suppose.

A is also for appreciation. Specifically, appreciation that I have two manuscripts polished and at the editor’s desk and I am now able to work on the story that needs rewriting. This is story #2 in a series I call Wanted: A Few Good Men, set in the 30s. I doubt that the publishers will use that title for the series but it doesn’t matter. I also appreciated all the plotting, character development, conflict charts and workshops I have accumulated over the years that make it just a bit easier to work on a story.

April is over (and so are April storms). Enjoy May.