Did you watch the opening ceremonies of the Vancouver winter Olympics? I did. 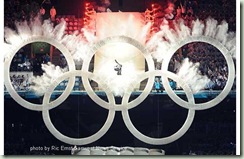 Why? Mostly to see who lit the cauldron. Would it be the Great One–Wayne Gretzky? Or perhaps some unknown? I liked one man’s suggestion. Have a hologram of Terry Fox. After all he’s one of our great Canadian heroes.
I thought the ceremonies were good. I especially enjoyed the laser lit bear and the awesome northern lights. I liked the fiddlers.
Then they brought in the Olympic flag. At least Betty Fox, Terry’s mother, was one of the flag bearers. As was Donald Sutherland who looked real fine dressed all in white, an Indie 500 driver, gold medalist Barbara Anne Scott, Singer Anne Murray, author and humanitarian Romeo Dalliare, ice hockey player Bobby Orr and space veteran, Julie Payette.
Several of these had been suggested for lighting the cauldron so they were now out of the running.
It was heart rending when the ceremonies stopped for one minute silence to honor the luger who died earlier in the day.
And then Rick Hanson, in a wheelchair, carried in the flame. He passed it off to speed skater Catriona Le May Doan. She passed it to NBA star, Steve Nash who passed to to gold-medal skier, Nancy Greene and finally to Wayne Gretzky. So he was one of the lighters. In the end, all except Hanson walked to the base and lit it and watched the flames rise to the top. 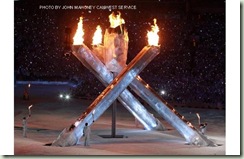 You’ll notice that one of the arms failed to come up out of the stage. Nevertheless, it went well.
All of this is writing related in case you wondered. The committee knew that maintaining the suspense to the end would keep people like me–not all that interested in sports–watching and wondering. They sustained tension which is something writers need to do in their stories. And they surprised us by having 5 people involved. Surprises are always good in a story.
What is really amazing about the Olympics is the whole world can come together for sports. They can forget for a few days in order to compete for a bit of hardware. Too bad they couldn’t do it for the good of the world, for the good of the children. Which reminds me of
WHAT I’VE BEEN READING: 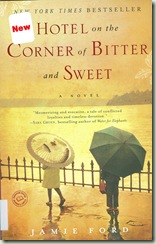 THE HOTEL ON THE CORNER OF BITTER AND SWEET by Jamie Ford. (I had to pick it up when I saw the name of the author.) This is a story of two young people caught in a world torn apart by war. One, a Japanese American girl who after the bombing of Pearl Harbor was interned as an enemy of the only country she knew. It’s the story of a Chinese boy whose father hated the Japanese invaders of China. It’s a story of a mutual love of jazz. It’s a story of honor, duty, sacrifice, loss and gain. As the boy, who is the narrator says, he learns to find the sweet among the bitter. A book well worth reading. An easy read. I would give it 4 out of 5 rating.