Story ideas come in such varied ways. Sometimes like a train coming down the tracks at high speeds. For instance, reading a journal from the past can give me a clear idea of a story. Or touring a museum and having a curator explain some historically significant event gives me a setting and details that could well turn into a story.

Other times, ideas come like perfume on the breeze. I can almost smell it, almost identify where it’s coming from. There are occasions when I track the scent down until I discover its source. 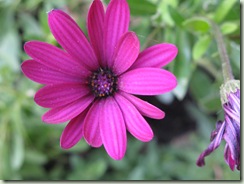 But other times, it remains illusive. Just a hint. Just a feeling.

The scent on the breeze came to me the other day while I was traveling across the country. It came in the form of a blue bike.

I first glimpsed it as I was taking picture of historical buildings. Just a glance in a doorway. I barely paid it any attention. But something about it drew my attention. I took a closer look. 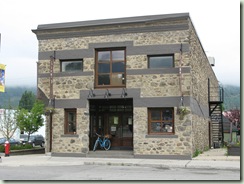 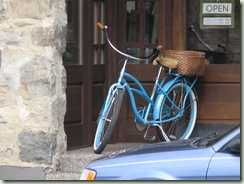 That blue bike continued to tug at my thoughts. Who owned it? Where did that person live? Was she the owner of the shop where it was parked or there on business?

I continued on my travels and returned a few days later to the same town intent on doing more research. Unbelievably, I saw the blue bike again. 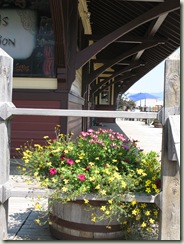 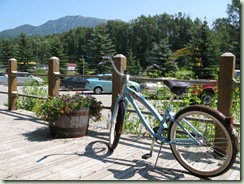 Now I was really intrigued.

For many of you, that would not be considered much of an idea. But for me, it is the beginning of a lot of questions and musings. Mind you, the blue bike will not make a story. It’s just one fragment. It takes more than one good idea to create  full-blown story. Perhaps hundreds are necessary.

Eventually, you will see the blue bike in  a story. It will be owned and ridden by a girl. She is the heroine of the story. You’ll have to wait to learn more. (Just like I’ll have to wait for more ideas.)

PS. Let me know if you see this blue bike in YOUR travels.