No not the magic kind with wings and a wand but the kind that takes you across the river. In our days of spending the summers on the road, living in a bunkhouse as we accompanied my father on his work, we encountered ferries.  At this time, bridges didn’t cross the river at every town but there were cable ferries. Similar to this one from the site http://www.rta.nsw.gov.au/cgi-bin/index.cgi?action=heritage.show&id=4300311 (There is more information on how these ferries work on this igreat site) 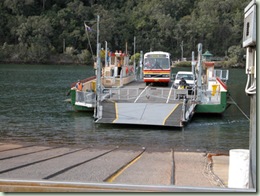 The first time I rode on one (Okay many times when I rode on one) I was scared. We sat right down on the water while the ferry was pulled across by a cable.  But I remember lots of things associated with the river crossings.

Like the ferry men who lived nearby one. When you needed to cross, you rang a bell. One such man, Mr. O, lived in his little cabin year round with only his dog to keep him company. Being young and naive, I was truly impressed with this dog. He could TALK. That’s what Mr. O said. We would troop down the hill to have tea with him. The dog had his own chair and sat up to the table just like another kid. Then Mr. O would turn to the dog and ask him to say grace. We would bow our heads (while peaking out from half closed eyes to see what would happen.) The dog prayed. He mumbled a little so I couldn’t catch the words but nevertheless…. Okay, I probably knew it was a trick. Or maybe not. Maybe…just maybe…my mom had to explain it to me. (I was very young. LOL) I often wonder about Mr. O. I know he is long gone. But did he enjoy his life? Was he lonely? Was the dog adequate company? And yes, the dog who prayed has made it into my stories.